Since the public introduction of our anti-reversion muffler by crateinsider.com, I’ve received multiple questions about these mufflers each week. So, I’ve decided to sit down and try to explain the benefits of reducing exhaust reversion.

Without getting too technical, which I’m not very technical anyway, we must first understand what exhaust reversion is, and secondly, how it affects an engine. Reversion is simply the flow of exhaust gasses back into the combustion chamber when the downward movement of the piston creates a vacuum in the cylinder. This event occurs when the camshaft is on the overlap, i.e. the exhaust valve is still open as the intake stroke begins. Now begin to think about the spent gasses that just left the combustion chamber, traveling out of your header pipe, approaching the collector and exiting directly from the collector or extension in the form of a pressure wave. When this pressure wave reaches the end of the pipe, it will be reflected in the form of a pulse. Simply put your hand over the end of your collector with the engine running, and you can feel these pulses. Some of this reflected pressure wave in the form of a pulse is then drawn back into the header thanks to camshaft overlap. This occurs, again, as both the exhaust and intake valve are open and the piston is moving back down the cylinder. The movement of the piston back down the cylinder, coupled with the opening of the intake valve as the exhaust valve is still open, creates an instantaneous vacuum that pulls air from the pressure wave/pulse back into the cylinder. Any exhaust gases that are drawn into the combustion chamber will displace the air/fuel mixture being drawn in through the intakes valves, contaminating the charge in the combustion chamber, thus reducing the volumetric efficiency of the engine, as well as engine power/torque. The more overlap that is built into a camshaft, the more reversion the engine sees. In extreme cases, you will also see residue from exhaust gasses in the plenum of intake manifolds. This is quite common on street engines with big radical camshafts that “beat the earth,” as people here in the south like to say. 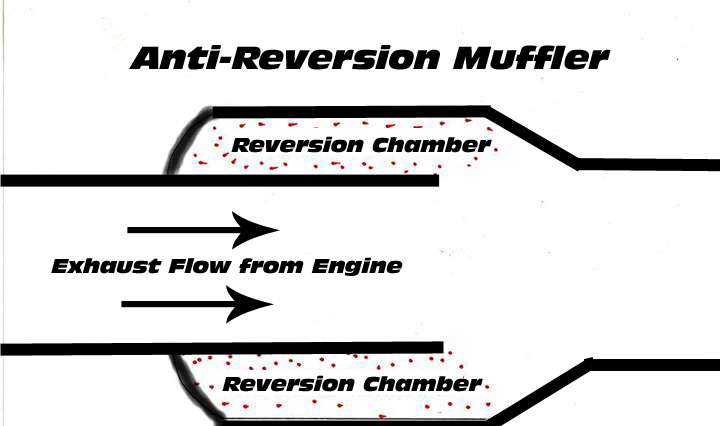 Over the years people have done everything to combat exhaust reversion, and free up horse power and torque that is literally being wasted due to the nature of the 4 cycle engine. If a racer doesn’t have the same budget as a NASCAR team that can afford to pay $5,000+ for headers and exhaust that are tuned specifically for their application, then they are reliant on the header manufacturers that mass produce product for the general public. However, even the common header manufacturers have done what they can do over the years to limit exhaust reversion in racing applications, and still be affordable. You most commonly see their efforts in the form of flanges that are larger in diameter than the exhaust ports, stepped headers, tri-y headers, merge collectors, different primary tube lengths from cylinder to cylinder, etc. While all of these things have significantly cut down on exhaust reversion, all of these things together, or any of these things by themselves have not eliminated it. So the idea of the anti-reversion muffler (it’s not really a muffler by the way, it’s an anti-reversion chamber), is to completely eliminate exhaust reversion. By doing this, we gain free power which usually comes in the form of significant torque gains in the 2,500-4,500rpm range.

We actually make three different variations of this anti-reversion muffler, depending on engine output. We currently have winning cars using one variation or another of this design running in the Lucas Oil Series, World of Outlaw Sprint Car Series & Late Model Series, UMP Late Models & Modifieds, NeSmith Racing Series, RUSH Racing Series, FASTRAK Racing Series, SECA Racing Series, SCCA, USAC , and the list goes on and on. We have seen torque gains of 50-60 ftlbs on open engines, and more recently 100ftlbs on Willy’s Carburetor & Dyno Shops chassis dyno (If you don’t believe it, call Willy at 618-262-8021 and ask him). We’ve seen gains of 15-25ftlbs between 2,500 and 4,500rpm on GM 604 engines, and lower horse power engines that use smaller less radical cams. We’ve seen up to 7 horse power and 9ftlbs of torque being gained on 4cyl 2300cc engines. Again the list goes on and on yet again. 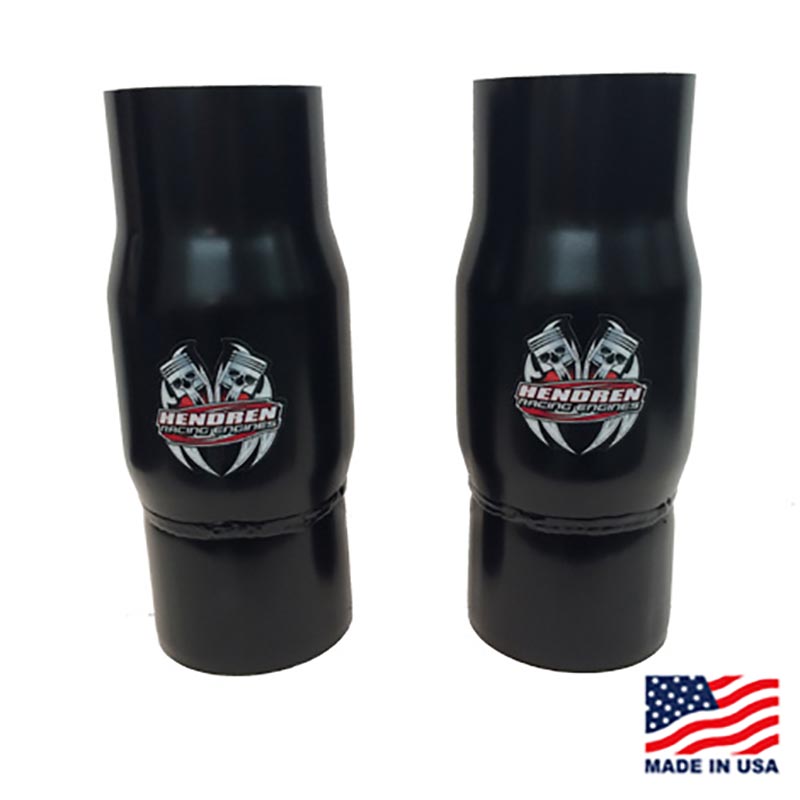 To make a long story short, reducing and or eliminating exhaust reversion is free power. Or at the very least, it’s cheap power. Preventing reversion will reduce the contamination of the air/fuel mixture by the spent exhaust gasses and will improve the efficiency of the engine. It’s really a very simple concept when you look at it in simple non-technical terms.

Please Note: Every exhaust system and engine is different. Some exhaust systems are more efficient than others, so anti-reversion result can vary. As a general rule of thumb, we have found that the longer the header primary tubes are, the closer you will want the muffler to the collector. Shorter primaries usually like about 12"-14" of extension before the anti-reversion muffler. We have also seen gains on tri-y headers, but at the same time we’ve seen a few tri-y’s that don’t benefit from the anti-reversion muffler. So, we always suggest dynoing this muffler on every application, unless it’s an application (such as the 604) that we have already figured out for you.