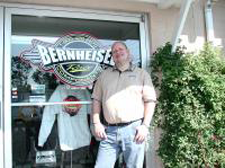 Jim is one of our experts in the Ask An Expert section of the Crate Insider forums.  He is the owner of Bernheisel Race Cars and the creator of Lazer Chassis.  He is located in Jonestown, Pennsylvania.  We had a chance to interview Jim and ask him a few questions:

CI:  Tell us about your background and how you became a chassis builder:

JB:  Back in 1978, a mentor, who was a welder and fabricator, helped me build my first car.  At the time, there were only two major chassis that everyone was running, neither of which are in business anymore, but I wanted to do something different.  Maybe I was stubborn, but I looked around at what was out there and thought I could do better with my own creation.

I started winning races in 1981, and continued racing part-time.  In 1989, I opened the shop and went full-time as a race business.

CI:  What type(s) of chassis do you build?

JB:  We mostly build Dirt Late Models.  We do some Street Stocks and Modifieds, but the vast majority of our business is Late Models.

CI:  What is the most important thing for a racer to consider when selecting a chassis?

JB:  We believe service and quality are the most important things to look for.  You need information to make you go and need to be able to communicate with and get answers from your chassis builder.

One trend I've seen lately is the emergence of what I call the “boutique chassis builder.”  You buy a chassis from someone and then have to pay to be a part of their program in order to get any information.  It's the same thing I'm seeing with some racers and their shock guys.  They pay a fee or a retainer to have them available.  The best example I can think of about this situation is that it would be like buying a new car at the Chevrolet dealership and then having to pay extra to get the manual.

We believe in sharing information freely with our customers and helping them with any information we have.

CI:  What differentiates your chassis' from others on the market?

JB:  Our quality and attention to detail is second-to-none.  For example, as a racer, when you're parked next to a guy at the track who has dirt clods hanging off of his car, you know you're going to beat him.  Now, it has nothing to do with the fact that his car is dirty.  But, it shows how he runs his racing program.

It is that attention to detail, with quality checks all along the way that sets us apart.  In racing, everything is based on reputation, whether perceived or real.  Quality, service and attention to detail are what we are known for.

CI:  Let's talk chassis technology. What have been the biggest changes over the years?

JB:  The biggest changes have been the availability of information for everyone.  There is so much information that can be gained from your chassis builder.

On the actual chassis technology side, the two biggest changes have been shock technology and the left rear behind 4-link set-up.

CI:  How can a racer obtain the optimal chassis setup?

There will always be challenges with set-up because of the constant changes that happen to the track throughout the night, the differences between tracks, and differences throughout the season.  What worked last year may not work this year.  My first recommendation is record-keeping.  The second is to follow the chassis builder's instructions.

CI:  What should racers be concerned with regarding setting up their chassis?

JB:  You need to find the right basis.  Everyone wants the “magic” or “miracle” set-up, but there's no one answer.  Start with a consistent approach.  Make sure that all parts are straight, installed properly, and not bound-up.

In our case, chassis set-up information is posted right on our website.  Following the instructions is the best place to start.

CI:  How do you go about testing your cars and developing baseline chassis settings?

JB:  We use a combination of technology and real world practice.  We have software programs where we can design and test in the virtual world with 3D modeling.  The design starts with an idea based on need.  We use the software to design and test.  For example, we can design a front-end.  After designing and testing it, we build a full-scale model.  Then we can do additional testing to see how it performs in comparison to the virtual testing.  For example, when we tested Ackerman steering in the virtual world, it wasn't the same as when we tested it at full-scale.

After all of this, we take new designs to the race track for real word testing.  After final research and testing, we incorporate any final changes and build the jigs, etc. to build the part.  We may be slow to come out with new things, but we take our time to work it out.  It goes back to the quality and attention to detail that I mentioned before.

JB:  Aerodynamics is equally important.  Whether the attention is good for the sport is debatable, but that's a discussion for another day.  Some people don't think aerodynamics is as important at lower speeds.  Now don't really want to try this, but I would challenge them to get in the back of a pick up truck with a piece of plywood.  Allow the driver to get up to 60 miles per hour, then stand up and try to hold the plywood vertical.  Aerodynamics will blow the person and the plywood off of the truck.

Aerodynamics does matter.  There are always trade-offs and a balance.  When we've done testing at Langley Air Force Base, we've seen a lot of potential changes we could make.  Some of these we don't do because we know they would get copied immediately, would be made illegal, would be costly, or would be too difficult to maintain.

We know some of our customers have us hang their bodies now because they are aware of the work we've done with aerodynamics.  More than anything, it is important to pay attention to the basics.

CI:  Anything new at your company?

JB:  Thank you for asking.  Yes.  We just released our 2014 car.  We have been testing for 2 years and we are building them now.  We've been using the same platform for 10 years because we believe in allowing our customers to reuse parts that they own.  The new car is a departure and is a new design from the ground-up.  We have done some things uniquely, such as the reverse right front strut and the brake floaters, which include the rear calipers on a separate birdcage.

To see the new chassis and for more information, visit Bernheisel Race Cars at www.bernheiselracecars.com.