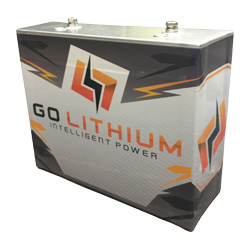 The GO Lithium 16V battery is incredibly powerful, recharges quickly, and weighs in at only 8 pounds!  Yes, 8 pounds!  With the lighter weight, the racer is able to move lead where it will be most effective.

This is the ONLY lithium battery on the market based on prismatic technology.  Prismatic cells are more durable and are able to store more power in a smaller area.  It is also internally balanced.  This ensures that the battery discharges and charges the five prismatic cells equally. Cell balancing on the battery increases the lifespan of the product dramatically. It is also an expensive option when building lithium batteries and that is why some (most) companies don’t do it.

For more information, we compiled a list of frequently asked questions:

Has it been tested?

Lithium batteries have been used for several years in NASCAR.  While there are other lithium batteries on the market, the pricing has been too high for the average racer.

The GO Lithium battery has undergone 3 years of research, development, and testing.  One test that all automotive batteries are subjected to is the CCA (Cold Cranking Amps) Test.  This is a Pass/Fail Test done to verify the CCA rating.  To conduct a pass/fail test, they load the fully charged battery with half of its claimed CCA and crank ONCE for 15 seconds. The voltage must stay above 9.6 during the 15 seconds of cranking for the battery to pass.

The GO Lithium Team did this same test with the new GO Lithium Prismatic cells, except they pulled FULL rated cranking for the 15 seconds. They waited one second and did it again. They repeated the 15 second cranking with 1 second pause 60 times before using the reserve power in the cell. The battery was slightly warm to the touch but it melted the shielding on the battery cables. GO Lithium’s Battery produced full rated and consistent power during the entire test dropping from full charge which is 14.4 Volts to what is considered 100 depth of discharge or 11.2 volts but never slowed its cranking. Actually the cranking speed sped up as the battery temperature increased slightly.

How does GO Lithium’s battery compare to a standard Racing Lead Acid Battery?

Let’s consider for a second that lead acid batteries were invented in 1859.  While advances have occurred, it is still based on 150-year-old technology.  When we look around in the world we live in, lithium batteries power our advanced technology.  Just because it’s newer doesn’t necessarily make it better automatically, but there are several reasons that make the GO Lithium Battery a better choice:

But is it safe?  Don’t lithium batteries explode?

The GO Lithium Battery is safe and is especially designed for racing applications.  To test, a Lithium cell is subjected to a puncture test in which a steel rod is driven through the cell. GO Lithium Cells passed this test without any explosion or fire.  This can be an issue with other types of lithium batteries.

How long does the GO Lithium battery last?

The life expectancy of the GO Lithium Battery is gauged by depth of discharge. Meaning, if a team used 100% of its reserve power it will last for 2000 charge cycles. In reality, when used in a race car running a 6al or HEI ignition, the depth of discharge will be under 50% resulting in a much longer life span.  The average team can expect the GO Lithium Battery to last for approximately 10 years.

Do I need to buy a special charger or can I use my existing battery charger?

While an existing battery charger could be used with some effectiveness, using the GO Lithium Battery Charger is strongly recommended.  It is designed specifically to charge the Lithium Prismatic Cells.

Is there a Warranty?

Yes, all GO Lithium batteries come with a full one-year replacement guarantee as well as a 3-year pro-rated warranty.

At Crate Insider, we are thrilled to introduce this technology to the market.  GO Lithium products are available in our store. 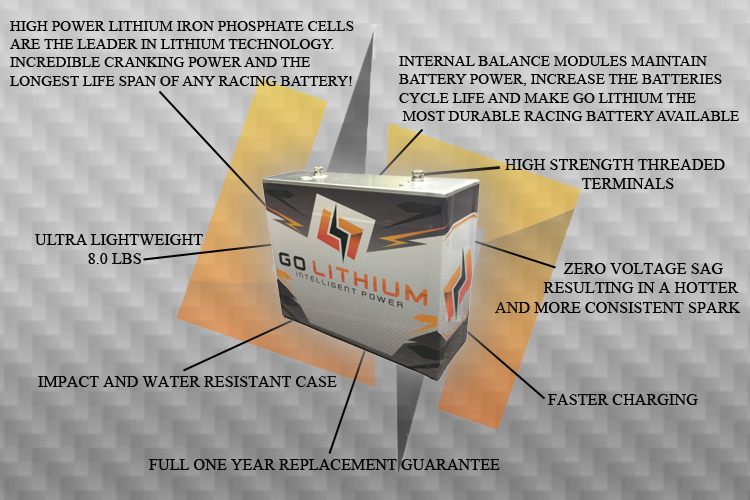