Buck Parker, inductee in the NASA Technology Hall of Fame, is well known as a lubrication specialist. He has now turned his attention from rockets to race cars. His company, Daytona 1, produces lubricants tailored for racing. We asked Buck if he could share some secrets on making cars go faster. He told us, “There is hidden power, torque and energy in every racecar. It gets lost and/or consumed in the drivetrain, and gets attacked by friction and drag from many outside as well as internal elements. The key to releasing the energy is to reduce the parasitic drag and available friction from as many areas as possible. We must free the car up in all aspects and let the power we have be released and transferred to the ground.

We at Daytona 1 realized that the best way we can help our racing family was to find that energy, see why and where it goes, and then develop a process and products that effectively correct the issues.

Over the past 20 years or so, we enlisted and worked with some of the best in the business—engine builders, crew chiefs, car owners, and teams, and have studied every moving part of the race car. As a group effort we looked inside the Motor, Rear ends, Transmissions, Hubs, Shocks, Power steering, and yes, even Heim Joints, to really see where this energy was being lost and what we can do to reclaim it.

With the help of engine builders, crew chiefs and race teams, we have developed and outlined clear and concise steps, as well as products and procedures that every race team can use. Whether it’s a 200hp. 4-cylinder entry-level racecar, an 850 HP Sprint Cup car or a 1,300 HP Drag car, each will benefit from this process. In most instances we find a minimum of an additional 2% of energy. In every instance the driver will feel the difference in the way the car runs and handles. The crews will even notice the way the car pushes easier.

These steps have became known as, “The DEFRICTIONATION Process”

Below is a step by step process and procedure that will help you free up your car, go faster, get better gas mileage, handle better, reduce wear and break downs, and put that extra power to the ground….where it should be.”

Dirt Track Racers Defrictionation System: (Follow these step by step. It is as easy as this to defrictionate and have a faster, better handling and longer lasting race car)

(2) Transmission: If you are using a Brinn, Falcon, Bert or roller slide transmission simply change the oil/lubricant and put in Daytona 1 Super Shift Dirt Track Trans Fluid with Defrictionators. If you are using a different transmission or normal 4 speed add 2 ounces of XL-1 Oil Treatment to your current oil. (Check on a regular basis. However, this oil is capable of running the entire season)

(3) Rear Gear: Change out gear oil and replace with Daytona 1 30/60 or 75/90 Racing Gear Oil. Daytona 1 Racing 30/60 has proven itself in all types of racing to add horsepower, reduce temperature and wear. (Check on a regular basis. However, this oil is capable of running the entire season)

(4) Power Steering: Change out fluid and add Daytona 1 Racing Power Steering Fluid. (Check on a regular basis. However, this oil is capable of running the entire season)

(5) Heim Joints: Spray all Heim Joints with Daytona 1 PSL (Professional Spray Lube). This allows the car to have free and easier movement. PSL was designed to clean as well as lubricate. Spray joints after washing and as needed. (Specifically formulated to not attract dirt and dust like other oils, the joints stay cleaner and lubricated longer)

(6) Hubs: (For Oil Fill Hubs ONLY) Clean Grease and/or other lubricant from hubs and replace with Daytona 1 Super Shift Trans Fluid. For regular grease filled hubs, use top quality performance grease and do not over pack.

You will see smoother operation and freely spinning wheel that moves and operates with quicker action." 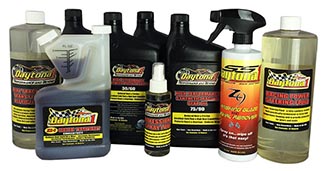 The Complete Kit is available in our store here: Daytona 1 Go-Fast Defrictionator Kit